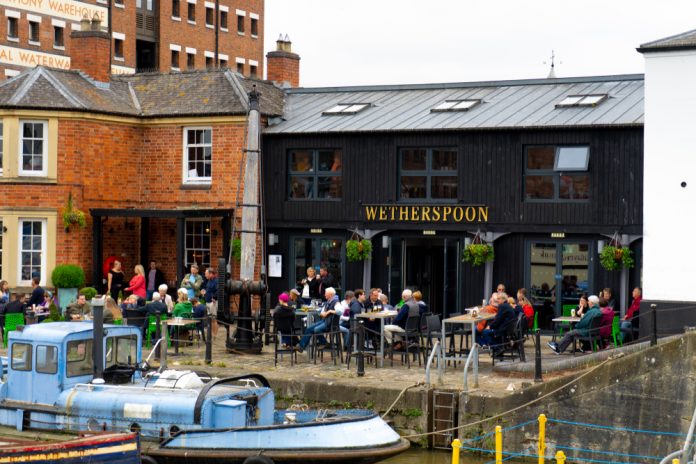 Since the start of the financial year, the Company has opened five new pubs and expects no further openings this year, while it has so far closed nine of its outlets.

Wetherspoon also said it had spent £5.4 million of its own shares amd £71 million on buying freeholds on pubs where it was previously a tenant.

It also reiterated that it was in a ‘sound’ financial position with net debt expected to stand at £745 million for the year’s end, and £3 million of non-cash losses owing to below-value pub disposals.

Brexit commentary by the Wetherspoon Chairman

“The main issue for shareholders, which dominates debate, relates to the nature of the UK’s post-Brexit relationship with the EU.”

“The dichotomy between a ‘no-deal’ Brexit and a ‘deal’, as it is often portrayed in the media, politics and business, is highly misleading. The term no-deal really means ‘multi-deal’ – a multitude of deals agreed between individuals, businesses, governments and other organisations.”

“In reality, a multi-deal Brexit (ie no-deal) is already proceeding at pace. Jean Marc Puissesseau, the boss of the port of Calais, has said “there will not be any delay” in Calais (appendix 1). Ryanair has said that fears about planes not flying post-Brexit “is no longer a risk” (appendix 2). British Airways agrees.”

“Wetherspoon, for example, has made arrangements to replace French champagne and brandy, and German beer, with alternatives from the UK, Australia and America. In addition, most spirits and beer exports to the EU from non-EU countries are not subject to tariffs, in any event.”

“Initial fears about huge post-referendum job losses in the City of London have proved to be wide of the mark, as legal and practical arrangements have been made, as indicated in the article by Reuters (appendix 3) below.”

“These sorts of deals and arrangements are the tip of a giant iceberg of similar transactions, across the trading spectrum, negotiated and facilitated by individuals, businesses and civil servants – the negative undertone of no-deal is an illusion.”

“The real issue for the UK relates to the desirability of an overarching mono-deal, governing all aspects of the UK’s future relationship with the EU, as envisaged in Theresa May’s withdrawal agreement.”

“The multi-deal approach, which immediately allows the UK to trade freely with the rest of the world, is a better alternative. As the House of Lords said in March 2017, there is then no legal liability to make any payments to the EU.”

“It enables the UK to regain control of fishing and to eliminate tariffs on thousands of non-EU imports, such as bananas, rice, wine and children’s clothes – many of which are not produced in the UK.”

“Democratic accountability will also be improved – the most important determinant of economic success.”

“A complex and overarching mono-deal, agreed under duress, is unnecessary and counterproductive. It would reduce the flexibility of UK businesses and Parliament in the future. The multi-deal approach is simpler, safer and will yield immediate dividends.

“As regards Wetherspoon, the Company’s expectation for our annual results is unchanged for the current financial year.”

The Company’s shares are currently trading up 2.7% or 38p at 1,446p a share 10/07/19 11:17 GMT. Peel Hunt and Liberum Capital have reiterated their ‘Hold’ stance on Wetherspoon stock, while Shore Capital reiterated their ‘Sell’ rating.

Elsewhere in alcoholic beverages news, there have been updates from; Distil PLC (LON: DIS) and Fattorie Dei Dolfi.